Emo Nite LA just announced the lineup for the two year anniversary of the monthly la event and it looks to be nothing short of legendary. 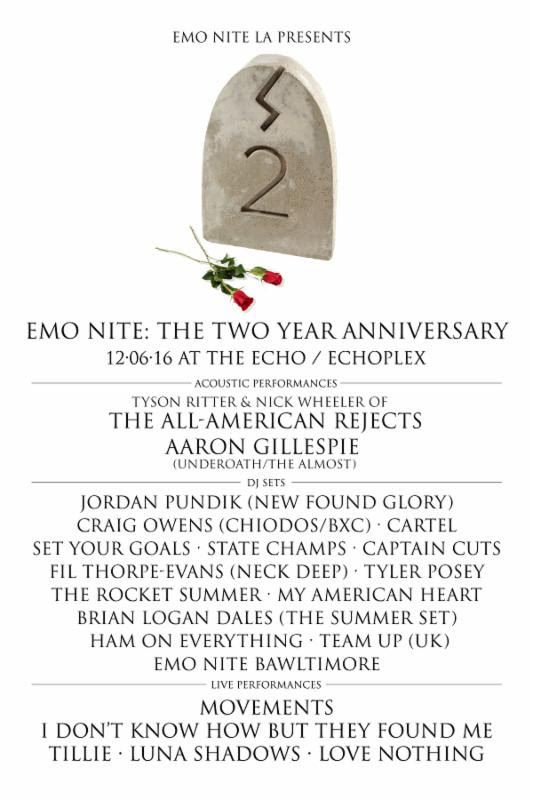 The last 100 tickets have been released and are available now HERE. The show will also be live streamed via twitch for a special presentation of  IHEARTCOMIX’s Live Stream Music Series ‘Party Stream’ called STREAMO NITE! Check out the press release below!

“November 23rd, 2016 – Los Angeles, CA – LA’s monthly Emo Nite event has announce the line-up for their massive upcoming two-year anniversary celebration taking place on Tuesday, December 6th at The Echo/Echoplex in Los Angeles exclusively with AltPress.com, here. Tyson Ritter and Nick Wheeler of The All-American Rejects and Aaron Gillespie (Underoath/The Almost) will be performing acoustic. Jordan Pundik (New Found Glory), Craig Owens (Chiodos/BXC), Cartel, Set Your Goals, State Champs, Fil Thorpe-Evans (Neck Deep), Tyler Posey, The Rocket Summer, Brian Logan Dales (The Summer Set), My American Heart, Captain Cuts, Ham on Everything, Team Up (UK) and the Emo Nite Bawltimore Team will give fans their best DJ sets throughout the evening. Additionally, there will be live performances by Movements, I Don’t Know How But They Found Me, Tillie, Luna Shadows and Love Nothing.  The event is currently sold out with the exception of the remaining 100 tickets being released right NOW, here: http://emonight.la/twoyearTIX.
The surprises don’t end with the line-up announce, so fans have to be ready for anything. “Everyone who comes to Emo Nite knows that they will see some unexpected things at the 2-year. We always have something weird up our sleeves,” founder Babs Szabo told AltPress. One additional surprise is the premiere of Captain Cuts newest mix tape, The Life of Emo, the night of the event. Captain Cuts member Ryan McMahon, a long time supporter of Emo Nite, said “TJ, Morgan, and Babs singlehandedly revived an entire generation of real boys and girls who grew up listening to pop-punk and emo music. We are trying our best to give back to the genre that inspired us to be all-killer and absolutely zero filler. We leave everything out there – as a result, this beautiful night in Echo Park might be slowly killing us. But if this is what it feels like in love & death, we welcome it with open arms.”
Not in LA the night of the 2 year rager? That’s OK! For Emo Nite LA fans across the country, the party will also be live streamed over at Twitch for a special presentation of IHEARTCOMIX’s Live Stream Music Series ‘Party Stream’ called STREAMO NITE! IHEARTCOMIX founder, Franki Chan says “We are fucking pumped to be a part of EMO NITE’s 2 year celebration and to bring this crazy event to the whole world via Party Stream. No party or group of people have blown me away more over the past few years than this crew, so damn right are we gonna put together an exciting program in honor of this anniversary! You’re gonna be able to experience EMO NITE in a way you’ve never been able to before!” For more information on IHEARTCOMIX, please visit http://www.iheartcomix.com/ or @IHEARTCOMIX across social media channels.
On celebrating their two-year anniversary, founder TJ Petracca said, “It’s honestly pretty surreal. This whole thing has gotten way bigger than we ever imagined or intended it to get. I’m so honored and happy to be celebrating two years of this party. We have made some amazing new friends, got to travel and see a ton of new cities, and meet our idols/heroes. Stepping back and looking at it from afar… I truly can’t believe it.”

Movements
I Don’t Know How But They Found Me
Tillie, Luna Shadows and Love Nothing.
Emo Night LAEmo Nite