Kevin Devine Debuts “I Was Alive Back Then (Feat. Half Waif)” Announces “We Are Who We’ve Always Been”

Alberto Herrera September 21, 2017 News No Comments on Kevin Devine Debuts “I Was Alive Back Then (Feat. Half Waif)” Announces “We Are Who We’ve Always Been”

Kevin Devine announced that he will be releasing a new album called We Are Who We’ve Always Been which will be a stripped down re-imagined version of their 2016 album Instigator. The album will be released October 20th.

I’m excited to announce We Are Who We’ve Always Been, a stripped-down photo negative re-imagining of Instigator, coming October 20th on Procrastinate Music Traitors and Triple Crown Records.

Tune back in tomorrow at 12PM EST for a song stream, pre-orders, and a special announcement. You can sign up to be notified of the launch at procrastinatemusictraitors.com/shop

Part according to plan & part in reaction to circumstances beyond our control blowing that plan up, I ended up doing nearly as much touring solo as we did full-band on Instigator, which, in its original presentation, was mostly a pretty full-on fuzzy power-pop record. It’s fun & challenging figuring out how to present the songs in each format so they feel equally compelling; with Instigator, I found the songs really felt like they made sense both ways, and ended up demanding an alternate presentation to highlight different strengths. It was, as always, a treat tackling that alongside Chris Bracco, my longest-standing creative collaborator, responsible here for production, mixing, and art design.

For the three songs that were already acoustic in presentation, we decided to build around piano/synth/other voices, and bring in three excellent friends way more qualified than I am to do that credibly. Will Schalda, who performs as SWIVS and plays with Charles Bradley & Budos Band, handled “Freddie Gray Blues;” Laura Burhenn, who plays as The Mynabirds and has toured as a member of Bright Eyes & The Postal Service, transformed “No One Says You Have To;” and Nandi Rose Plunkett, who plays as Half Waif & is a member of Pinegrove, opened up “I Was Alive Back Then.” They all absolutely and uniquely killed it.

I think the record stands as its own document, has its own voice, and completes the full story of these songs. I hope you feel the same. See you tomorrow…

Along with the album Kevin Devine debut the first track from the record I Was Alive Back Then featuring Half Waif via Sterogum. Listen below!

The album, produced by longterm collaborator Chris Bracco features guest performances from Swivs, The Mynabirds, and Half Waif. It will be released October 20th via Procrastinate! Music Traitors and Triple Crown Records. Preorder HERE

Kevin Devine also announced two shows in Brooklyn, NY in December. The first show, on 12/14 at The Bell House will feature him performing We Are Who We’ve Always Been and his 2003 record Make The Clocks Move. The second show, on 12/16 at Music Hall Of Williamsburg, will feature Kevin Devine & The Goddamn Band playing Instigator in full, as well as his 2006 album Put Your Ghost To Rest. Both shows will feature special guests that will be announced… maybe sometime soon? Kevin Devine recently announced he will be joining Brand New as a touring member for the foreseeable future. 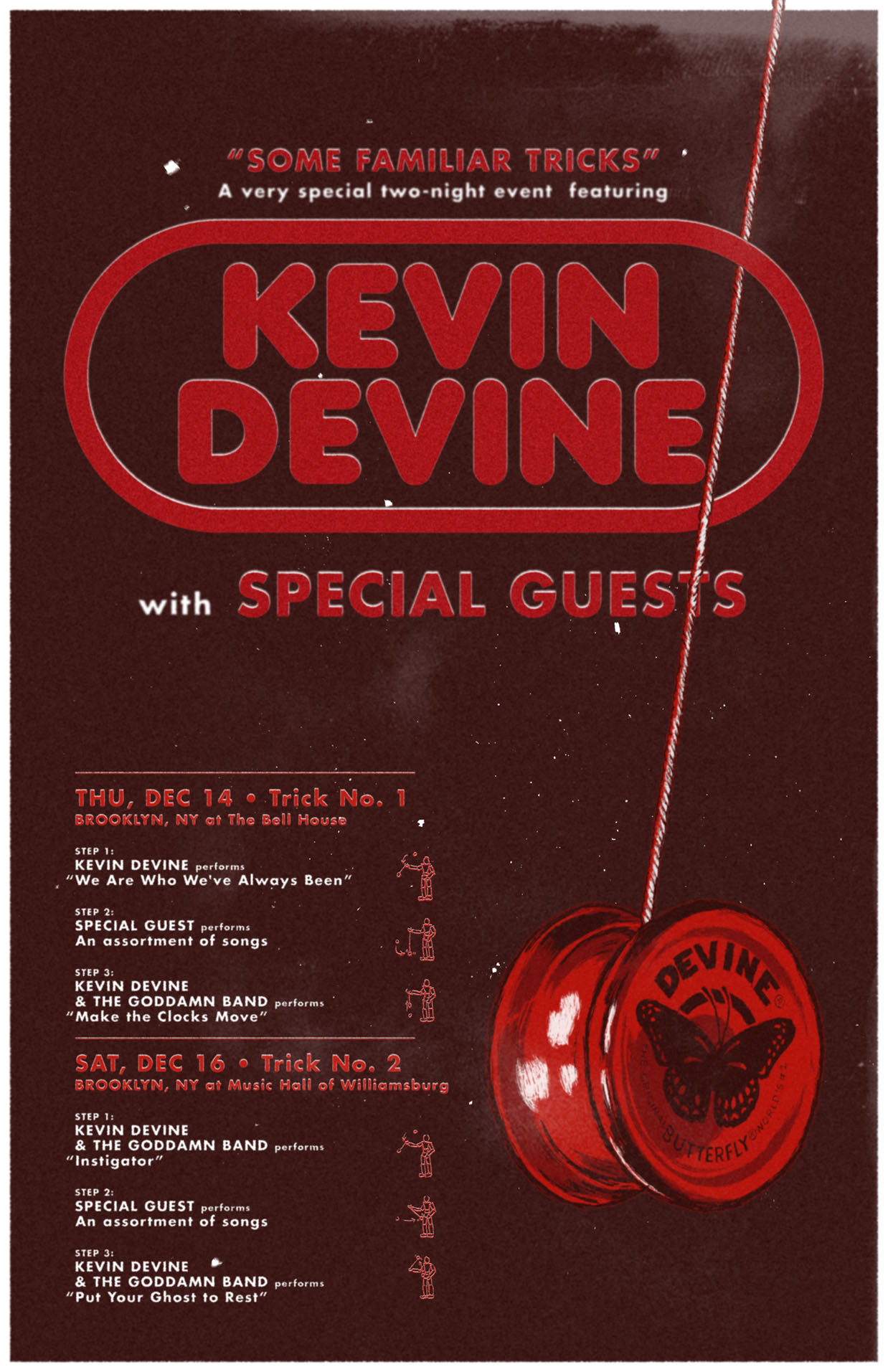 ! = w/ Taking Back Sunday
^ = A Celebration Of Jack Kerouac
* = Kevin Devine plays We Are Who We’ve Always Been and Make The Clocks Move
% = Kevin Devine & The Goddamn Band play Instigator and Put Your Ghost To Rest