Atreyu announced today that they will be playing their first show in 3 years September 11th at The Chain Reaction in Anaheim, CA 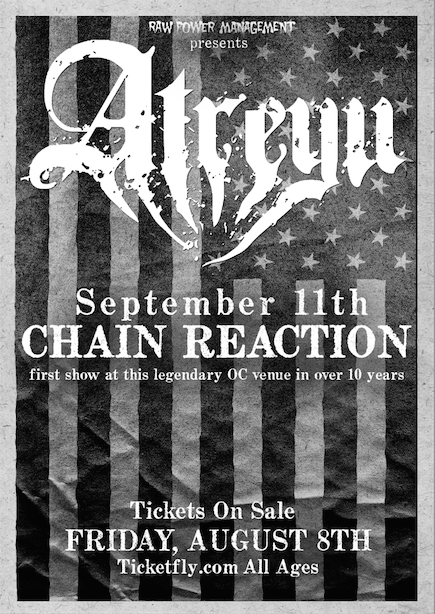 August 4, 2014 – Los Angeles, CA – SoCal metal giants, Atreyu, recently announced their return from hiatus after 3 years of dormancy. Now the band has revealed that their first returning show will take place at Chain Reaction in Anaheim, CA on September 11th. Tickets for the All Ages show will go on sale Friday, August 8th at www.ticketfly.com.
The reunited lineup, featuring vocalist Alex Varkatzas, drummer Brandon Saller, guitarists Dan Jacobs and Travis Miguel and bassist Marc Mcknight, will perform at Orange County’s intimate and beloved venue, Chain Reaction, for the first time in over a decade. The hometown performance will also set the stage for the band’s upcoming performance at the AFTERSHOCK 2014 festival on September 14th in Sacramento, CA.
Time will tell what Atreyu’s plans are following these shows, but it’s safe to say the metal juggernauts are only getting started….” – Via Official Press Release
Atreyu

Atreyu Debut “Do You Know Who You Are?” Music Video