In an acoustic video for “The Debate Is Over (If You Want It)” Anti-Flag takes on climate change starting with the quote “Climate change is a battle between Capitalism and the planet” watch below Pre-sales for their new album American Reckoning go on sale tomorrow! [...] 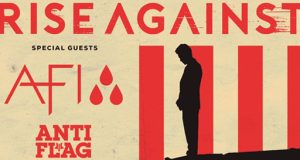 In defiance of the state of the nation, Rise Against, AFI, and Anti-Flag annouced they will be touring the states and Canada on the Mourning In Amerika Tour Tickets go live March 30th at 10am Local Time. July 28th, Toronto, ON @ RBC Echo Beach** July 29th, Portland, ME @ State Theatre July 31st, Worcester, [...]

AntiFlag continues to fight the system, this time with a brand new podcast titled The ANTIcast which takes on the issues starting with Episode one jumping right into gun control Listen to the podcast HERE!   [...]

Anti-Flag debut another fiery track titled “Mr. Motherfucker” a one take demo which originally appeared as a b-side on the American Attraction picture disk Listen via apple music or spotify below! [...]

Anti-Flag continues its vitriolic attack on the current administration’s “war on the planet” in a brand new music video called “Liar” watch below! The track is off American Fall which is out now. Pick it up HERE The band is also reminding fans that today November 7th is Election Day and hundreds of mayoral and [...]

Anti-Flag Announce Tour With Stray From The Path, Debut “When The Wall Falls”

Anti Flag announced that they will continue to fight the normalization of bigotry taking their message on the road on the  Silence=Violence Tour with Stray From The Path. Tickets go on sale tomorrow. The band continue to fight against the political turmoil of our day this time taking on the gender and race pay gap, [...]

Anti-Flag debut another new track off their upcoming album American Fall. Check out the lyric video for “The Criminals” where they take up income inequality, corruption, and just about everything that is wrong with the world today. “When a society prioritizes the pursuit of wealth over all else and its leaders celebrate violence, authoritarianism and [...]

Anti-Flag is not staying silent in the face of the political turmoil of the day. The band announced that they will be releasing a brand new album called The American Fall on November 3rd. The band also posted a brand new music video for “American Attraction” that showcases scenes from every day life contrasted with the [...] 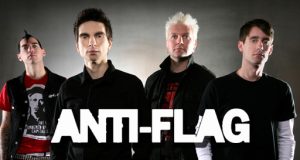 Anti-Flag released a new video called “Racists” in response to racist riots and violence in Charlottesville this weekend. [...]

Anti-Flag is rising up against injustice and intolerance again in a new video series called “I Am Anti-” where the members take up the issues that they will fight against. Watch below “Those of us who love peace must organize as effectively as the war hawks. As they spread the propaganda of war, we must [...]