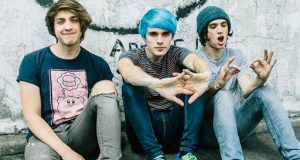 Houston pop-punk trio Waterparks have signed a record deal with Equal Vision Records and are set to release their debut album in 2016. The band also recently signed with the Madden Brothers under their management company MDDN.co. Today the band premiered the official music video for their single “Crave” which can be seen below. Waterparks [...]