Taking Back Sunday Debut “You Can’t Look Back”

Alberto Herrera August 23, 2016 News No Comments on Taking Back Sunday Debut “You Can’t Look Back”

Taking Back Sunday just released the second single off their upcoming album Tidal Wave. Today, the band posted a new music video that starts around the campfire before something completely unexpected happens to singer Adam Lazzara watch the video below!

The track is off their upcoming album Tidal Wave out September 16, 2016. Preorder HERE

Taking Back Sunday announced a new tour and this time they are hitting all the smaller clubs for an intimate show.

“Decided to do the next tour in smaller clubs.
Because there are no rules. On-sale Thur 7.21 at noon.
‪#‎TidalWave‬” – via Facebook 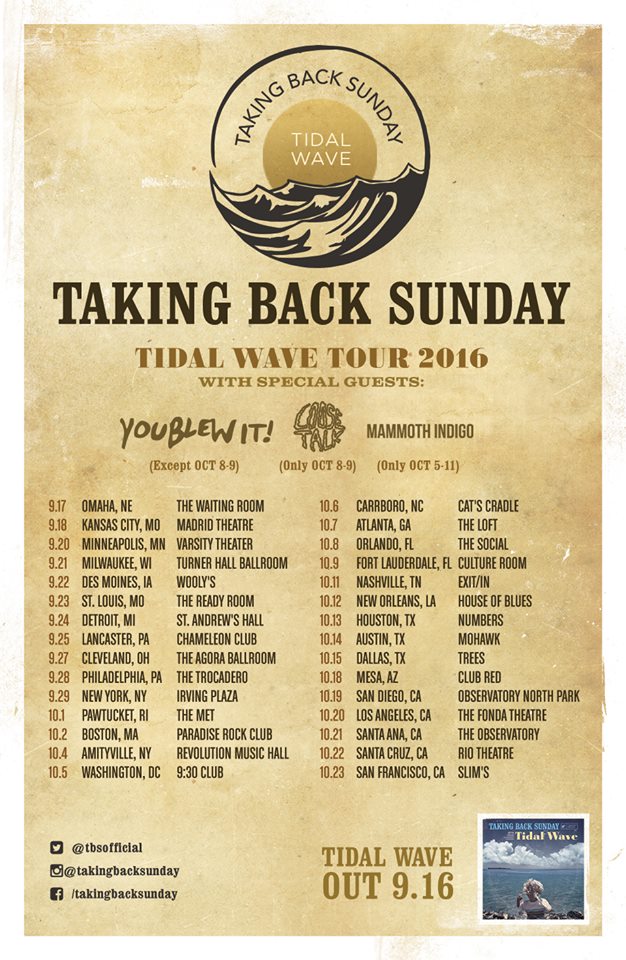 “We’d like to debut this record as honestly as we can and what better way to do that in a small club? Outside of a week there in the middle, it’s a two band bill, so we’re going to have to play for a long time.”  – Via Official Press Release

You Blew It! will provide direct support except for Oct 8th and 9th where Loose Talk (featuring former members of Anberlin) will fill in, and October 5-11 which will see  Mammoth Indigo opening up the show. Many shows already sold out, but the band will be holding an auction for two tickets, a Meet & Greet with the band, a signed copy of Tidal Wave, a signed set list, etc. to benefit Sweet Relief Musicians Fund which provides financial assistance to struggling musicians.  The auction can be found HERE

Check out our new interview with Taking Back Sunday talking about their new album ‘Tidal Wave,’ their single “Holy Water,” and a bit of history. Watch below!